We are all aware of sensationalist media reports depicting hoarders as freaks or health hazards but not many of us understand the extent of hoarding within the population or the complexity of this condition.  Working on rehousing projects in inner-London over the past 20 years has given me an insight into hoarding and the complex people who hoard. My experience indicates that 10-20% of people living in social housing have a hoarding issue –  they are primarily but not always single.

Joe was not my first hoarder or indeed the worst, but probably the most memorable  and certainly a “text book” example of the complexities of the compulsion. Joe was 80, born on a small Mediterranean island, he recalled traumatic childhood memories of WW2. How he ended up in social housing in London is unclear.   Joe lived quietly, until the day that regeneration arrived on his estate, resulting in the need for him to move to make way for demolition. Joe had no interest in improving his housing conditions, he believed that he was being systematically poisoned by the authorities, agents and persons unknown. He had created a makeshift bunker within his flat in which he felt safe, he was surrounded by his huge collection of useful things. Every ache and pain  he put down to substances to which he had been subjected; he believed he was being followed daily and photographed the people he believed were responsible sharing these photographs whenever we met. 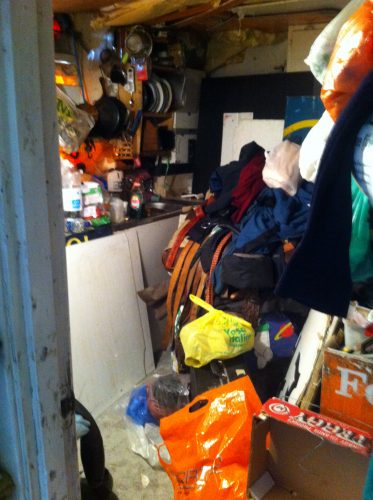 He traveled all over London to shake them off, he was forever on the move on some self-set assignment to get copies of documents and request that records held about him be destroyed. Joe was constantly surprising he visited book shops and knew all the latest titles, he spent afternoons at the cinema, he knew every bus route and public building in London He remembered the name of every council officer and had a clear view whether they were “part of it” – the conspiracy that is.

The day came when, supported by the excellent decant team at Hackney Council, a new home was identified for Joe and the long process of gaining his trust and relocating his bunker began. We started with single carrier bags, and odd things taken to charity shops; then boxes passed through the door; larger items too precious to be entrusted to strangers pushed on a makeshift trolley (sometimes under the cover of night); and occasionally via the boot of my car. Finally he trusted me enough to let me into his home and we could accelerate the process.

Almost two years later, having checked his new home daily  for “substances” and people getting in while he was not there; thanks to extremely patient council officers; the removal contractor who staged a phased removal; and repairs operatives –  the longest running decant move in the history of social housing was completed. Joe took me to breakfast to celebrate and paid me a touching compliment ” I have spent years running away from people because I had been in their home but couldn’t ask them into mine. Now you have been into my home – you are in my heart”.

Joe isolated himself from his brother and sister, he never married believing that contact with him would put others in danger. His delusions made him believe and say strange things, he lived a desperately lonely life and sadly died alone only six months after moving. Now he is in my heart too.

From my experience with Joe and many others like him – here are some tips for dealing with hoarders:

If you would like advice or practical support with a hoarder we are happy to help, we can agree strategies engage hoarders  and provide support workers to do face-to-face support.