Up until 20 working days ago, we wondered how we would manage to speak to so many people about so many projects and ensure that at least 7 projects would get through the ballot and planning processes this year. 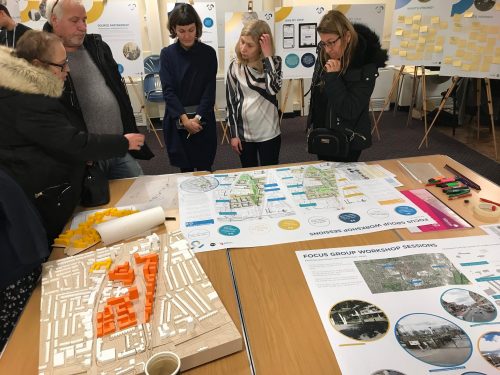 With some of our clients, this push took on a life of its own driven by balancing lots of proects,  staff and venue availability and stretching everybody’s resources to the limit. Our last public event took place on the second Thursday in March and it was clear the next day,  when the football season was suspended due to risks presented the Covid-19 virus, that our industry would need to think again.

We have shifted to virtual consultation and communications;  taken our computers home and rationalised what can be done without resident input. The truth is not very much can, and I am sure that other partners in our projects are realising just how pivotal gaining the the trust and belief of residents is. Nothing can proceed to ballot or planning applications without residents seeing, hearing,  touching plans. A timely reminder of where the power should rest, within the community.

Communities need to be supported to adapt to the new normal; to put themselves and their loved ones first; and lost of all forget the worry that regeneration brings with it as well as the advantages. Whilst we can’t meet face-to-face we are keen to keep in touch and alleviate any worries people may have. Even if you are feeling stir-crazy and just want a chat, give us a call or drop an e-mail.

We have made is a list of resources for families cooped-up at home and wanting a way to keep brains going Lockdown links Feel free to ask for a copy and share this widely we all need all the help we can get. The advice from an experienced home educator is to choose just one or two activities each day plus the PE class if your family is not active otherwise (walking / cycling / playing outside), rather than attempt a home education. If nothing else, it limits screen time. If we come across more we will send them on.

We really hope you all keep healthy and well and that we see you all at a community event before too long.

The countryside. What is it? The green bit outside of the city… right? It’s the bit where we can see and commune with nature, where we can frolic about in meadows and get away from the grey oppression of the city and urban sprawl. This traditional idyllic perspective has been embedded in my psyche from an early age. However, having explored the data on the recent birdlife and other natural losses in the UK, I now realise the error of this innate conceptual view.

Let’s dig into the thin descriptive veneer of ‘countryside’ and look at the shocking reality beneath. If we take out the 12 per cent of land use considered to be urban and developed land in the UK (i.e. where most of us live and work), we are left with nearly 80 per cent of our so called countryside being used for farming; to put this in context, less than one per cent of land use in England is set aside for Nature Reserves.

With the increased pressure on farmers to produce cheaper and cheaper food alongside advances in bio-technology, most of our countryside is nothing more than an open air factory. Here is a quick rundown of some of the things that have happened to our countryside since the Second World War and have accelerated since the 1970s: reductions in mixed farming, increases in monoculture farming, a rise in the use of fertilisers and pesticides, the drainage of wetlands, hedgerow removal, loss of hay meadow and destruction of scrub and heathland.

Not to mention our internationally important moorlands where we intensively farm red grouse to the detriment of other wildlife – and then we go and shoot them! The most nature found outside of urban areas is now often found on motorway verges and railway cuttings. Stand back from that bright yellow rape field and consider that building a housing estate would almost inevitably increase the biodiversity.

It is no wonder that of all our bird population indices it is farmland birds that have suffered the greatest reductions, with populations falling by more than 50 per cent in the last 40 years, while 67 per cent of the UK’s birds are now species of conservation concern. Who would have thought that the one time pest the starling would now be a species of concern.

So what does this have to do with regeneration?

So what about our cities – they are just as bad, aren’t they? Hardly havens for wildlife? Well, let’s start off with the striking statistic that 47 per cent of our biggest urban area, London, is green space, with a commitment to making more than 50 per cent by 2050 as part of the London Environment Strategy. This large green area consists of parks, playing fields, railway cuttings, brownfield sites, gardens and local nature reserves (of which there are over 140). Furthermore, it is not intensively farmed or managed, is surprisingly rich in wildlife and has the potential to be richer.

Of course, this urban environment has its own pressures. Loss of garden area is the greatest erosion of London’s green space with the continued rise of hard surfacing of front drives, the encroachment of patios and the increased use of artificial grass. We really should be having a word with ourselves when we are concerned more with the protection of a lump of inert metal than we are of our natural landscape.

There are also losses due to the development of brownfield sites, traditionally and incorrectly considered poor for wildlife, whilst we still retain a tendency to over-manage and manicure parks and gardens. The mantra should be scrub is good.

But why should we care anyway? We are already in the so-called Sixth Extinction, there’s not much we can do and the younger generation never knew paradise before they put up a parking lot, therefore they don’t rue nature’s losses. Well, I believe this so called ‘extinction of experience’, particularly amongst urban millennials, can and importantly should be overcome.

Urban areas are where the majority of people live and work (82 per cent in the UK) and urbanisation is a global and national increasing fact of life. Most of us recognise and qualitatively pronounce the beneficial feelings of getting out of our stuffy office or house into natural spaces but there is also plenty of scientific evidence to say having access to nature, interacting with nature and being proximate to nature is good for our physical and mental well-being, aids recovery from severe illnesses and reduces stress, crime and anti-social behaviour.

We can’t get away from nature; it’s all around us, it’s the air we breathe and the food we eat. The abundance of nature is an indicator of the health of our environment and, indeed, the health of us. We city dwellers need to recognise the growing importance of our natural surroundings over the so-called countryside and understand it is incumbent on us to engage more with our surroundings and protect and enhance what we have. The more we engage, the more pleasure we get, the more we communicate and the more we care – and, importantly, the more nature has a chance.

Dave Clark is an ornithologist and environmental campaigner with a particular interest in the interactions between birds and humans. With an MSC in Ornithology from the University of Birmingham, he is awaiting publication in the academic press of a study into our motivations for feeding wild birds. Dave is keen to spread the word about the importance of urban areas for wildlife and improving our engagement with nature. He can be reached at dave@mailbox.co.uk