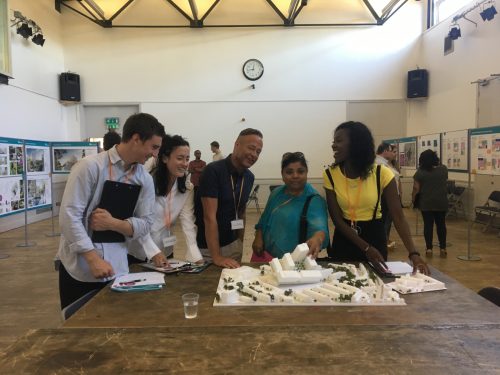 The Government’s Green Paper on Social Housing came out promising four main items. One of the main items was to tackle “the stigma felt by residents”, to which the paper proposed the solution of “celebrating thriving communities”. And yet, two key questions that the green paper failed to address were “what is the stigma” and “what divides are there within estates and  communities?”

Many regeneration projects involve creating new private blocks to be sold on the estates in order to pay for “new and improved” social housing. When talking to residents on a soon to be regenerated estate in Camberwell, I heard that one of their biggest concerns was the potential divide between the new block of private and the old close-knit community. Whether finishes would be completed to the same standard; whether they would be locked out of communal facilities aligned with private block as they’d seen in other estates; whether they’d be made to feel lesser by those living on the same plot of land that they had currently inhabited exclusively . The residents were sure this would exist, the so-called poor doors.

When presented with initial plans, some residents went so far as to measure the split of open space overlooked by blocks for existing tenants and blocks for potential private owners. They found inequalities and stigma.

If this is what “stigma” is, then it comes as no surprise, evident differences in the standard of living due to the difference of social and private housing which occurs even within the same estate. But how have we found ourselves at this point, where people expect this level of blatant stigma? I’m a linguistics student, so I cannot help but be drawn to the language. The terms “council housing”, “social housing”, “council housing residents”. Compare to other countries such as Singapore where “government built” housing is abundant and sought after, their “public housing” and its residents are not termed under “council” or “social”. Instead the acronym HDB (housing development board) is used. And the people? Just residents. They are residents of Singapore who live in their homes.

The very policy of determining residents of council and social housing as that seeks to establish their identity according to their place in society. They are not homeowners. They are tenants of the council, the society. When we seek to establish who a person is according to where they live, how can stigma help but exist?

So, if the stigma can be felt and perceived by residents in their own homes and then physically seen in the differences between private and social in their estates or within how housing associations treat the divide, then the problem with stigma does not exist solely within the public’s perception but rather within the estates themselves. We have ingrained stigma through language and so many other policies into the very people that are meant to be helped. And to now differentiate between the “thriving communities” and the communities that are struggling as a solution only isolates the latter. It may help public perception, but does it actually help the residents?

Some small things for consideration: